Double amputee, Charles Narh Teye overcame the challenges life has thrown at him to become a gym manager and paralympian.

“Basic school wasn’t as exciting for me. It was so strange for me to cope because I was so different from everyone.  Everyone had both legs and I was the only one with these on” Charles Narh Teye tells me with glassy eyes as he points to his prosthetic legs, and although his hands are shaking while he speaks, the confidence in his voice feels like that of a gladiator. He seems unperturbed about his disability lately but some years back, it was the clear opposite – a feeling of dejection, being rejected and painfully stuck away from everyone else defined his life. How he feels now is a far cry from what he felt back then. Charles has had to live a life of fear, of trepidation and the thought of always trying to hide something. These days, it isn’t the same.

Narh Teye hails from Manye Jorpanya in the Eastern Region. A little dot on the map of Ghana in between Doryumu and Kodiabe with its inhabitants predominantly being farmers, potters and hunters. One of the houses close to Charles’ in the area has the words “Emaa hi” written boldly in front of it – an Adangbe expression that loosely translates to, “It shall be well”. It is a saying the people there have lived by. Simple lives with a sort of bright optimism of light being at the end of the tunnel albeit not knowing how far it extends. He is a hard Ga Adangbe man with a sense of bravery that can be traced back to his ancestors. The Se tribe were the first dwellers of the Shai Hills and lived in the caves and hills there for years. Their level of courage as told by historians was unmatched. Killing animals with rocks and sticks and walking miles in search of potable drinking water. The Shai traditional area was their safe space. The caves served as an ideal hiding place from intruders. They fought wars and defeated many. In those times, they were some of the most cunning people to do battle with. In 1892 though, they were forcibly expelled from the area by the British. Many of them fled to the lowlands and neighbouring lands where they have stayed till date. The Dangbe blood that flows through Charles’ veins are a testament of how he has pushed through the distress of being disabled and has set him apart from his peers.

At only a week old, Charles’ parents realised an unusual discolouration of their son’s feet. The uncommon nature of the little boy’s feet later grew bizarre. “My mother tells me that at one point when they were bathing me, my toes were falling off,” Charles reminisces. They quickly rushed him to the hospital. There, he underwent a preventative surgery to stop the spread of an infection that was quickly consuming his whole body. He lost his legs days after. “My dad was devastated. He tells me many times how he locked himself in his room alone for hours and cried”

Living as a double amputee is hard. People treat you differently wherever you go: none more so than being a primary school boy with a condition like this. At a young age and while at school, Charles was nicknamed “iron leg” when his prosthetic legs broke during a game of football, laying him bare to ridicule, humiliation and discrimination. He had a good education regardless of the adversity he faced all through. He went to the Good Shepherd Technical School in the capital after his basic school education which he had in Tema – Ghana’s industrial town 40km east of the the capital. His tertiary education was at the Institute of Management Studies.

His woes didn’t end after completing school. Charles lost two jobs – one as a sales merchant with a multinational beverage corporation in Accra and the other offloading cars from shipping vessels at the Tema Port – after he was labelled a liability. “…I was fired from both jobs because my prosthetic legs came off. My supervisors, until that happened didn’t know I was a double amputee. They asked me to go home because they didn’t want to take any risks with me”.

For the many disappointments that has befallen Charles in his 43-year-old life, he still radiates a vitalising energy, the zest and gaiety of an inexhaustible joie de vivre. His demeanour is lovely – shares the best jokes, has dreams and the biggest optimist I know now. He has achieved so much now. So much that if a genie pops up and hands him a time turner to go back and change anything in his life, “I will not choose different. I love what I am now. Two legs do not mean much to me any more”

“For the many disappointments that has befallen Charles in his 43-year-old life, he still radiates a vitalising energy, the zest and gaiety of an inexhaustible joie de vivre.”

The stars aligned for Charles after he heard a radio announcement calling for persons interested in participating in Paralympic Games in Greece to come ‘justify their inclusion’ at the National Sports Stadium.

Prior to that radio announcement, he had already developed a love for weightlifting and bodybuilding. Charles, together with a neighbour, had constructed a makeshift gym substituting traditional gym equipment with concrete cast, fufu pestle and old car engine plates, thus making the decision to choose which sport to compete in an easy one to make.

Now blessed with an amazing prospect but yet still straddled with obstacles to being the very best at his chosen sport because he was unemployed, Charles joined the Ghana Society for the Physically Challenged where he was put to work at their chalk factory. He worked at the Disability Centre after completing his daily training sessions at the National Sports Stadium.

As luck would have it, Charles met a social worker who took keen interest in his story. He was given the opportunity to work at a gym as a supervisor. A position he diligently held on to, working hard and rising through the ranks to become the manager of two gyms.

“I managed the gyms for 12 years. My experience there helped boost my confidence in the fitness industry and as a powerlifter.”

Since becoming a Powerlifter, Charles has been Ghana’s only representative in major tournaments: in the Commonwealth Games, All African Games and Paralympics. All of which he does with great pride and holds so close to his heart. “My name is in the history books. Charles Narh Teye, me? Who would’ve thought? If I die today, my name will be a headline on the Olympic page, and many will sympathise with my family. It is great for me”.

“Since becoming a Powerlifter, Charles has been Ghana’s only representative in major tournaments: in the Commonwealth Games, All African Games and Paralympics. All of which he does with great pride and holds so close to his heart. “My name is in the history books. Charles Narh Teye, me?”

Despite the many rejections, Charles has had a few people by his side. His wife, 4 children, family and Philippa Pepera who owns the Pippa’s Gym in Osu – Accra. “Pippa has been great for me. She handed me an opportunity and I will forever be grateful.” Charles says with a smile almost telling of how incredible Pippa has been for him. While I sit and chat with him in the Pippa’s gym, she stands about 50 yards from us watching on, listening with rapt attention – clearly showing a lot of interest in what was happening. “He was obviously ready to do something. He was super physically fit. When first met Charles, if you had told me there was a physical disability, I would not have believed it. What I saw in Charles when I first met him was a positive outlook, a super positive attitude, very polite, very straightforward and direct and a willingness to work” Pippa says as she carefully takes me through some old photos of them together.

In 2015 in Glasgow, Charles suffered a shoulder dislocation during a training session, while preparing for the Commonwealth Games. This ruled him out of that year’s competition.

“It was one of the toughest moments in my career and really set me back.”. He however didn’t allow the injury to stop him. His qualification to the Olympics in 2016 showed he had put that nightmarish incident behind him and ploughed on.

Charles doubles as the Team Manager of the Ghana Amputee Football Team where he uses his knowledge and years of training experience to drive the team to success encouraging young amputee athletes to join the sports despite the plethora of challenges it is riddled with.

“It takes individuals and companies who really understand the culture of the sport and how it operates to sponsor it. I can’t give up. It’s a good thing to showcase your talents to the world. For me, this is an opportunity to show people I have no limitations. I plan to do this till I’m old enough and realise I can’t do it anymore. That’s when I’ll stop.”

Charles’ message is simple; Disability is not inability! And he’s on a quest to change naïve public perception about Persons with Disability.

“Powerlifting has been rewarding. My disability has put me on a certain level.”

“I always tell people even if God decides to give me new legs, I’ll tell him I don’t want them anymore because I enjoy what I have. I’ve been exposed in so many ways and made lots of contacts. I have had the opportunity to stand on the same stage with the likes of Stephen Appiah, Anas Aremeyaw Anas and Emmanuel Ofosu Yeboah. My family is happy and my children are proud of me.”

The 43-year-old husband, father of 4, two-time Olympian and our 2020 EMY Africa ‘Man of Courage’ award winner, is still basking in the glory of his award. He says he felt on top of the world the moment his name was called out.

“I can’t quite explain how I felt standing on the podium holding the award. It was a great feeling; greater than how I felt after qualifying for the Paralympics.”

It is still a long road for Charles. No matter how undulating it has been, he believes the light of day will be clearer and like the inscription on the house in his village says “Emaa hi”, it will get better as he is slowly finding out.

Published in the print edition of the September 2020, Awards issue of the EMY Africa Magazine, with the headline “Paralift.”

Yaw Ofosu Larbi is a journalist whose life revolves around reading and writing. He finds joy in telling other people’s stories. 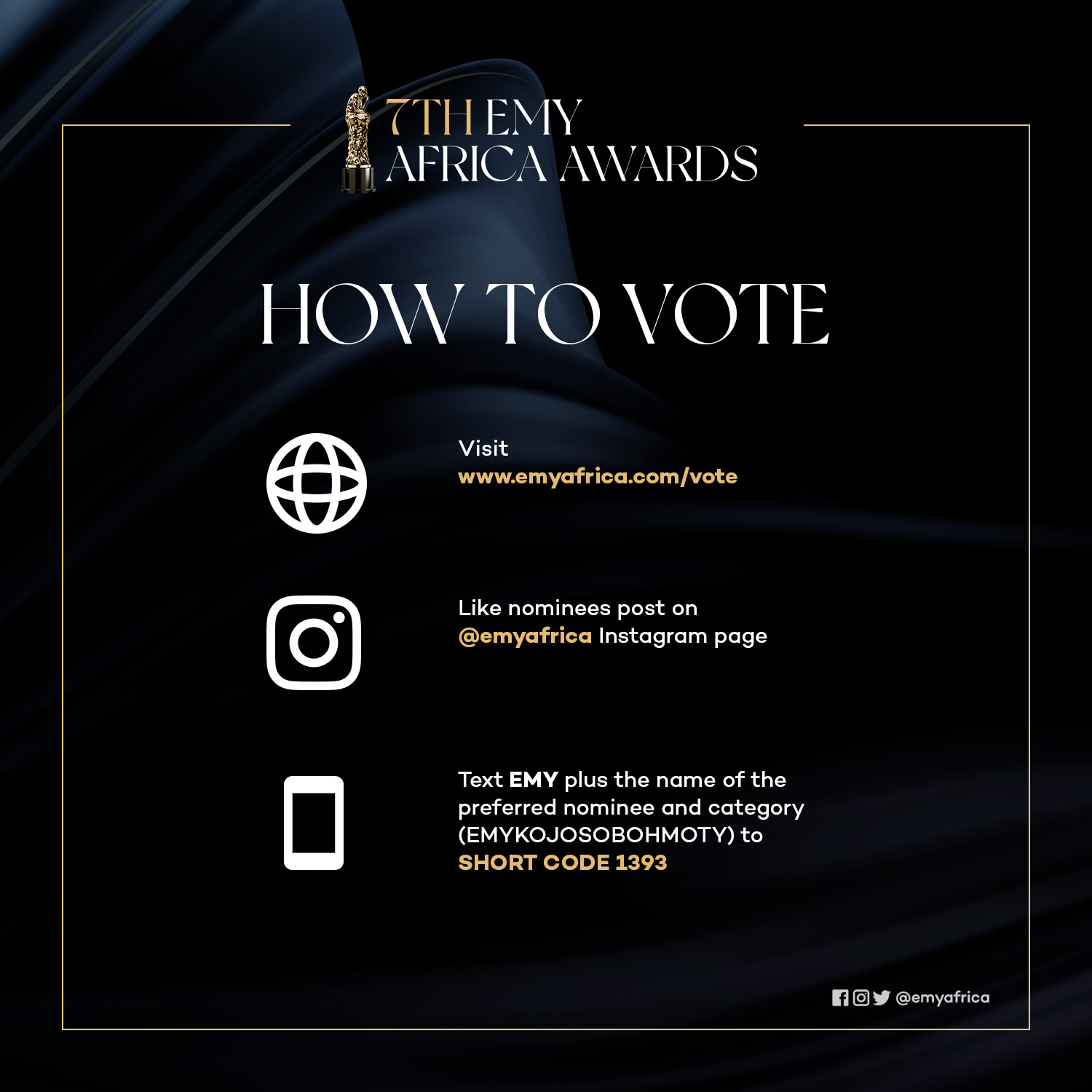